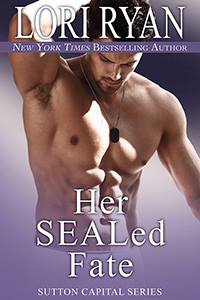 Synopsis
He thought he left the battlefield behind.

Logan Stone should be happy. More than happy, in fact. He’s Sutton Capital’s newest executive, working side-by-side with Samantha Page, the sexy, brilliant woman of his dreams. He’s no longer overseas in the line of fire, fighting alongside his brothers-in-arms as a Navy SEAL, but Logan is fighting a different kind of battle. One no one realizes he’s in. While he was focused on managing his PTSD, something much more sinister enters his world and he must battle to save Samantha’s life and their growing love.

With all the heart stopping action and heartwarming romance NY Times bestselling author Lori Ryan has come to be known for, this stand-alone installment to the Sutton Capital Series won’t disappoint romantic suspense readers and fans!

Lori will donate 100% of her proceeds from eBook sales of this book for two weeks to the Semper Fi Fund and to Patriot Paws. Purchase this book from August 17-28, 2015 to help support these incredible organizations helping veterans and military service members.

They fought for us overseas. Let’s support them when they come home.

“You know I like you, right?”
Okaaaaay. Not exactly what Logan expected to hear from Chad Thompson, head of Sutton Capital Security and Jack’s best friend and cousin. Logan glanced over at the big man standing next to him and frowned. They’d gotten to know each other over the past few months, since Chad and Zach were friends, but he had no interest in talking about Chad’s feelings. And, Chad hadn’t really struck him as the touchy feely type. The man had been an Army Ranger and he was built like a tank. He didn’t scream big giant teddy-bear.
“Uh, sure.” Logan took a step to the side, inching away from Chad. There was an odd glint to the man’s eyes.
“I’m just saying, I like you,” Chad said and then let his gaze move to where Logan’s had been moments before. Across the room, Sam stood talking to some of the other women who worked at Sutton. “But, it needs to be said, if you mess with Sam, I won’t hesitate to implement a few of the more interesting techniques for dismembering bodies I’ve got tucked away.”
Andrew Weston, Sutton Capital’s Chief Financial Officer, and the third in the trio of best friends who ran Sutton and owned the majority of its shares, sidled up on the other side of Logan. He sipped what looked to be whiskey or bourbon of some kind from a glass.
“Here, here,” he said quietly, raising his glass in a toast.
Logan rolled his eyes. “It’s not that I don’t appreciate the sentiment, gentlemen, and let me assure you, I have no intention of messing with her, but please. Don’t delude yourselves into thinking you can take me. Need I remind you of the fact that you’ve been out of the action for, what, ten years Chad?”
Logan had to admit, the conversation might have turned a tad juvenile after that, with he and Chad throwing insults at one another under their breath. Andrew cheered one side or the other on as the mood seemed to strike him.  It didn’t have to be said that Logan had heard the warning and respected it. They loved Sam like a kid sister. Logan might be unreasonably attracted to her, but he was very well aware that his head was in the wrong damn place to be starting anything with a woman. Especially a woman like Sam. One who mattered. Given the fact that he wasn’t even sure he should be walking around civilized people instead of locked up in a hospital somewhere talking about his feelings, he wasn’t relationship material.
Jack joined the men where they stood still debating the training and prowess of the SEALs teams versus that of the Army Rangers. All three men laughed when Jack opened with: “So, Logan, you know I like you right?” as his eyes cut across the room to Sam.
Logan shook his head. “Yeah, yeah. I got it. You’ll kill me in new and interesting ways. We’ve covered it. Chad’s most recent plan includes fileting me from head to toe and Andrew has promised to bring salt to the party.”
“Hey, I said salt and margaritas,” Andrew said with a grin.
Jack laughed. “I thought we’d take you out on the boat, chum the waters, and see if a SEAL could swim faster than a shark.”
Logan had to grin at the creativity of the men who stood laughing around him. He saw Sam glance toward their group and his smile stilled. What the hell. He might as well be honest with these guys and let them know they had nothing to worry about.
“Listen, Samantha Page may very well be one of the sexiest creatures to walk the earth, but I’m not planning on dating her. You guys don’t have to—” And, that’s where he broke off, because he’d just watched Sam’s eyes go wide and round with surprise, as though she’d understood every word he’d said. Every damn word.
“Jack. Would Samantha by any chance happen to read lips?” Logan didn’t take his eyes off Sam as he asked the question, and she seemed to choke on her drink as he asked the question.
Jack could hardly speak and Andrew and Chad seemed to be completely useless as they laughed at his blunder.
“Sure does,” Jack finally said as Logan continued to stare at a now red Sam across the room. “Why do you think she sits in on every negotiation I go to? Real handy trick.”
Of course it is.

Lori Ryan is a NY Times and USA Today bestselling author who writes contemporary romance with a twist of suspense. Her books range from sweetheart to steamy in heat level. Lori published her first novel in April of 2013 and has fallen in love with writing. She is the author of the Sutton Capital Series; the Evers, Texas Series; and the Triple Play Curse Novellas, a set of novellas with sexy baseball players at their core as part of Bella Andre's Game For Love Kindle World.

She lives with an extremely understanding husband, two wonderful children (with another on the way!), two mostly well-behaved dogs, and a lone little cat in Austin, Texas. It's a bit of a zoo, but she wouldn't change a thing. She loves to connect with her readers. Follow her on Facebook or Twitter or subscribe to her blog.
Blog tour: Her SEALed Fate by Lori Ryan !ALL PREORDER PROCEEDS GO TO CHARITY!